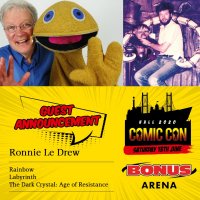 We are over the rainbow to announce that Puppeteer Ronnie Le Drew will be joining us for Hull Comic Con 2020 on Saturday 13th June at the Bonus Arena, Hull. From David Bowie to Michael Caine, Ronnie has worked with some of the biggest names in the entertainment industry. His work with The Jim Henson Company has seen him perform as various characters in The Muppet Christmas Carol, Muppet Treasure Island, Labyrinth and the recent Netflix series Dark Crystal – Age of Resistance. His puppet skills have also been used over the years by a wide range of productions including Little Shop of Horrors, The Mighty Boosh and as Sweep in The Sooty Show.

He is most closely associated with the Children’s TV character Zippy from Rainbow whom he has performed since 1973. His relationship with Zippy continues to this day. Ronnie recently published his book Zippy and Me which will be available at the event on the day, or from Amazon and all good bookshops. Ronnie will be accompanied by our next guest………

Zippy appeared in every episode of Rainbow from 1972 to 1994, and the follow up series Rainbow Days in 1996. Zippy has appeared on a wide range of commercials and TV shows since Rainbow ended including Harry Hill’s TV Burp and Celebrity Juice.