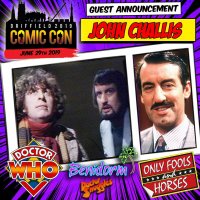 We are excited to announce our first guests for Driffield Comic Con 2019!

John is well known for his role as Boycie in the very popular long running TV series Only Fools and Horses!
He was also cast in a recurring role in the BBC's long-running police drama Z Cars as Sergeant Culshaw. He then played heavies in The Sweeney and Doctor Who. Most recently John has starred in the hit series Benidorm as Monty Staines.

John will be available for autographs, a free Q&A session and photographs!

Abbie 'Stabby' Art is a freelance artist born and bred in East Yorkshire. Abbie will be talking about how her career and art work has developed, as well as inspiring the next generation of artists to take the plunge as well with her free workshop - Doodle a While with Stabby Rial.

Don't forget our after party is FREE and we have managed to secure one of the biggest Con scene DJs Level Up Leory!

Level-up Leroy specialises in creating a super nerd-centric mix and mash-up between EDM, K-Pop, Chip Tune, Rock and the Top 40.
Level-up Leroy has performed across the U.K including MCM, New York Comic Con,
Sci-Fi weekender, London Super Comic Con, For the Love of Sci-Fi and many more.

Worried about getting home? Why not pitch up a tent or caravan for ten pound per pitch! Squeeze as many as you can in for one payment of ten pounds!

Advance tickets are cheaper than those bought on the day and are on sale now at: https://www.district14.co.uk/tickets/