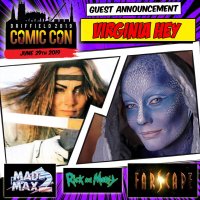 We are delighted to announce that Virginia Hey will be joining us at Driffield Comic Con 2019! this year at Driffield Showground on June 29th.

Virginia is best known for the role of the blue priestess Zotoh Zhaan in Farscape, for which she was nominated for best supporting actress by the Saturn Awards.

She also played the Warrior Woman in Mad Max 2: The Road Warrior and General Pushkin's girlfriend in the James Bond film The Living Daylights. More recently Virginia voiced a Gazorpian in Rick & Morty.